Hello F1 fans! Welcome to my post for this years Abu Dhabi Grand Prix! It was a great way to end a fantastic season. There was a big coincidence. Lewis Hamilton’s car number is number 44. Abu Dhabi is in a nation called the United Arab Emirates which is celebrating it’s 44th year of independence. Lewis Hamilton was also going of for his 44th win in his career. Talk about timing!

Coming into the race, Nico Rosberg had found some recent form, winning the last 2 races and 5 straight pole positions. Rosberg won pole position and denied Hamilton his 50th pole. The 3 time world champion will Just have to wait until next year to get his 50th. Kimi Raikkonen qualified third, 8 tenths of a second behind Rosberg. Sergio Perez got one of his best grid positions of the year, qualifying 4th. Sebastian Vettel qualified 16th after a miscalculation from the team. 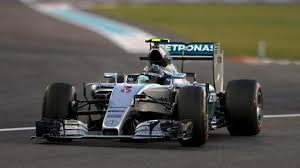 There was a lot of action at the start, with Rosberg acing the start and Hamilton having a terrible one. 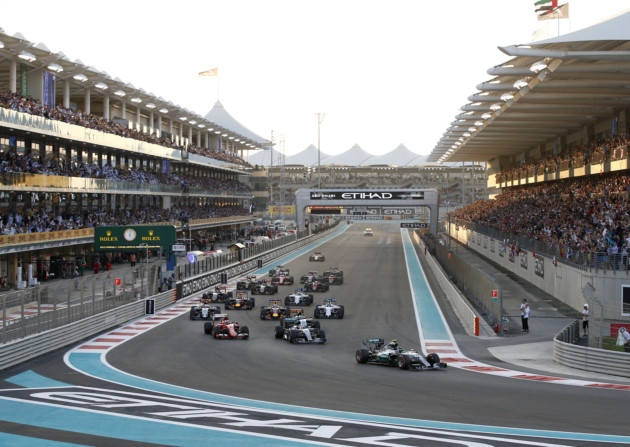 There was action at the back to. Fernando was hit by one of the Saubers, which caused him to hit Pastor Maldonado ending Maldonado’s race. Sebastian Vettel was lucky to just miss the incident. 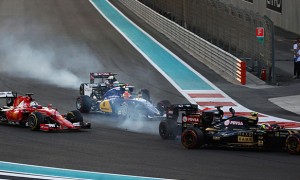 The incident with Alonso took Maldonado out of the race.

Rosberg built a 5 second lead over Hamilton before he came in for his first pit stop of the race on lap 10. Hamilton caught up to Rosberg on the second stint, closing the gap. For the last stint, Hamilton decided to go on the soft tyers instead of the faster super soft tyers. He did this so he could go faster for longer. The super soft tyers wear out very quickly. There were 12 laps to go and he was 12 seconds behind. For the first few laps, Hamilton gained on Rosberg. (1 second a lap) After about six or seven laps, his tyers started to wear out which neutralized his advantage.

Sebastian Vettel rapidly gained places throughout the race, repeating his performance in 2012 when he started from the pit lane and finished third.

He gained 3 places on the first lap, and many more as the race went on. At one point, he was in third before he made his second pitstop. For his final pitstop on lap 39, he was 5 seconds behind Sergio Perez in fourth. He put on super soft tyers for his final stint and passed Perez after 6 laps. Vettel did well to finish 4th after starting 16th. His teammate Raikkonen did well to get the final podium spot in third. He hasn’t had the best of seasons, but turned things around this race.

As the laps wore down, it became clear that Nico Rosberg would win the race. He did with Hamilton in second. Third was Kimi Raikkonen, who started third and was undisturbed for the whole race (very good drive from him). Sebastian Vettel finished fourth after starting 16th on the grid. I think him, Perez and Rosberg would be the drivers of the day.

I hope you enjoyed my post, and I will write my next post on Monday. A special post for the end of the season. I hope you liked this 2015 season (I certainly did) and I am 100% sure the next one will be fantastic.

Fact of the day: Mercedes scored the most points in a season than any other team has done. 703 points.