Hello F1 fans! Welcome to my post about the Brazilian Grand Prix. It was a great race with a result that nobody really expected. Nico Rosberg was in this race coming off a win in Mexico with outstanding pace, which Hamilton just couldn’t match. He beat him fair and square. 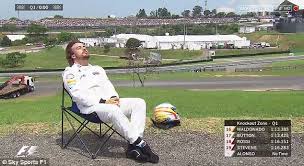 Fernando Alonso has had a really frustrating season this year. After his car broke down in qualifying, instead of getting a ride to the pits, he sunbathed!

Rosberg beat Hamilton to pole by less than a tenth of a second! Sebastian Vettel was closer than usual to Mercedes only 4 tenths of a second off Hamilton’s time. Valtteri Bottas did well to qualify fourth, in front of Kimi Raikkonen in fifth. Rosberg aced the start with Hamilton doing similar. They were wheel to wheel in the first corner with Rosberg coming out on top. Hamilton stayed close to Rosberg for the first part of the race, but then his tyers wore out which made him slow down. Hamilton said that he should change his strategy for the race. The Mercedes team didm’t want to because of the pace from Vettel. Mercedes ended up changing their strategy because tyre wear was worse than they thought. Vettel continued to push hard until his soft tyres stared to wear out, slowing him down. Like the Mercedes team, Vettel was on a 3 stop strategy.

Hamilton came out almost 2 seconds behind Rosberg after his final pit stop. This was his last chance to pass Rosberg with 20 laps to go. Farther behind, there was also action. Max Vesstappen, one of the rising stars of f1 made a great pass on Sergio Perez at the first corner. I think he could be a future world champion.

Here is another great video you should watch:

Hamilton was running out of time and laps. He lowered his aggression and fell back, handing Rosberg the victory. Vettel came third, showing great speed throughout the race. He was closer than usual to the Mercedes. His teammate Kimi Raikkonen finished fifth behind Valtteri Bottas who finished fourth.

Fact of the day: After the race in Brazil, Nico Rosberg became the second most experienced German F1 driver ever! Only behind Michael Schumacher.