Hello F1 fans! Welcome to my Flashback Fridays Post! In case you don’t know Flashback Fridays is a special post which I write about great F1 races from the past. Today I will Be writing about the 2008 Brazilian Grand Prix.

Coming in to the race, young Lewis Hamilton (23 at the time) had 94 points, 7 ahead of championship rival Felipe Massa who had 87 points. If Massa won the race and Hamilton finished sixth or worse, he would be world champion. However, there was a possibility that there would be a tie in points between them. If that happens, Massa would be world champion, because he had more wins.

In qualifying, Massa claimed Pole Position while Hamilton qualified fourth. Before the race, the track was slightly damp. Then, before the race heavy rain hit. This made most of the teams change to wet weather tyres.

Out of the first corner, the top 5 was Massa, Trulli, Raikkonen, Hamilton and then Kovilainen. Alonso and Vettel soon got past Kovilainen to claim fifth and sixth. 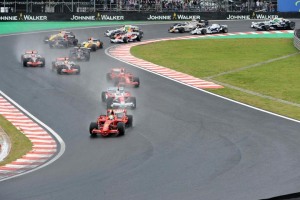 An accident, which caused David Coulthard and Nelson Piquet jr. to retire from the race deployed the safety car. Soon the track started to dry. The teams were thinking about switching to dry weather tyres. The first person to do this was Giancarlo Fisichella an lap 2. On the fifth lap, the race resumed as the safety car pulled in. Next was Nico Rosberg and Jenson Button pitted two laps later. Soon most of the front runners would do the same. By lap 15, Massa was leading Vettel, followed by Fisichella and then Hamilton. 3 laps later, Hamilton would pass Fisichella, promoting him to third place.

About 10 laps later, Vettel pitted, regoining in sixth behind Timo Glock. Massa pitted on lap 38 with Hamilton and Alonso doing the same two laps later. Kimi Raikkonen, on lap 43 pitted from the lead, giving it back to Felipe Massa. Vettel stopped for fuel on lap 51, so he would have enough to finish the race. Race leader Massa had just under a 10 second lead over second place Fernando Alonso. Vettel, in fifth was bearing down on Hamilton in fourth.

With 8 laps to go, it stated to rain. One of the first of the drivers to react was Nick Hifeld a lap later. Timo Glock decided to stay on dry weather Tyres. ( A decision that would be controversial.)  Alonso and Raikkonen pitted soon after. Hamilton and Vettel went into the pits on the same lap. On lap 69 out of 71 it started to rain harder. Hamilton ran wide and Vettel seized the opportunity to pass him for fourth. It looked like it was over and Massa would win the title. However, Glock’s decision to stay on dry tyres backfired and was based by Hamilton for fifth on the last corner!

Imagine what it would be like to be a Massa fan at that moment! On the bright side, imagine being a Hamilton fan and witnessing that shock at the final corner. Hamilton did enough to win the championship by one point. Truly amazing.

I hope you enjoyed my post and my next one will be on Monday for the upcoming Russian Grand Prix.