Hello F1 fans! Welcome to my third and final post of my F1 experience series called The Big Race in Montreal. This was the final day of the weekend, which is always looked forward to. That big event is the race.

I had a lot of fun watching the race. 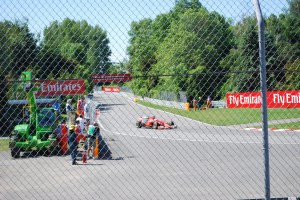 We could see the cars coming from a very cool angle. There was even a crash at this corner! 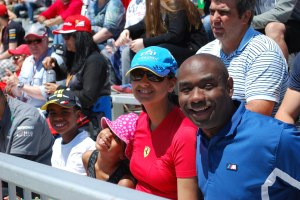 My family are very big fans of Formula One. My dad introduced me to the sport. 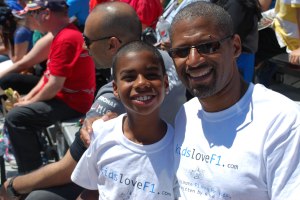 My uncle Terence came all the way from Mississippi just to see the race! I also went to this same race with him when I was 3. 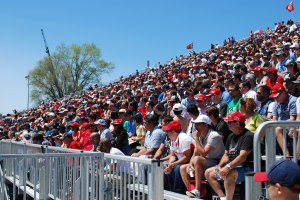 Every year in the Montreal Grand Prix, the grandstands are packed with people. It is one of the biggest annual events in the city. People even decorate hotels for the race! Around 285,000 people attend in the whole weekend.

I was very excited to see the outcome of the race because the driver I was supporting, Sebastian Vettel was 18th on the grid. He eventually finished in 5th place, completing one of his best drives.

Here is a video of it:

When you “flat spot” a tyre, it is not good. A flat spot is a part of the tyre, which has become thinner because of losing rubber. You can get flat spots by locking up. This means for a split second the tyre has stopped moving and gets scraped across the track while braking. You know drivers have locked up when you see smoke coming out of their tyres. This is the same thing that happened to Lewis Hamilton in the race.

As the race was drawing to a close, Nico Rosberg closed the gap to Hamilton after he flat- spotted his tyre. Sebastian Vettel also made a great pass on Nico Hulkenberg late in the back straight. In the end Hamilton held the lead from Rosberg winning one of the best races I have ever watched.

Fact of the day: The youngest driver on the grid, Max Vestappen is a teenager! Only 17 years Old!